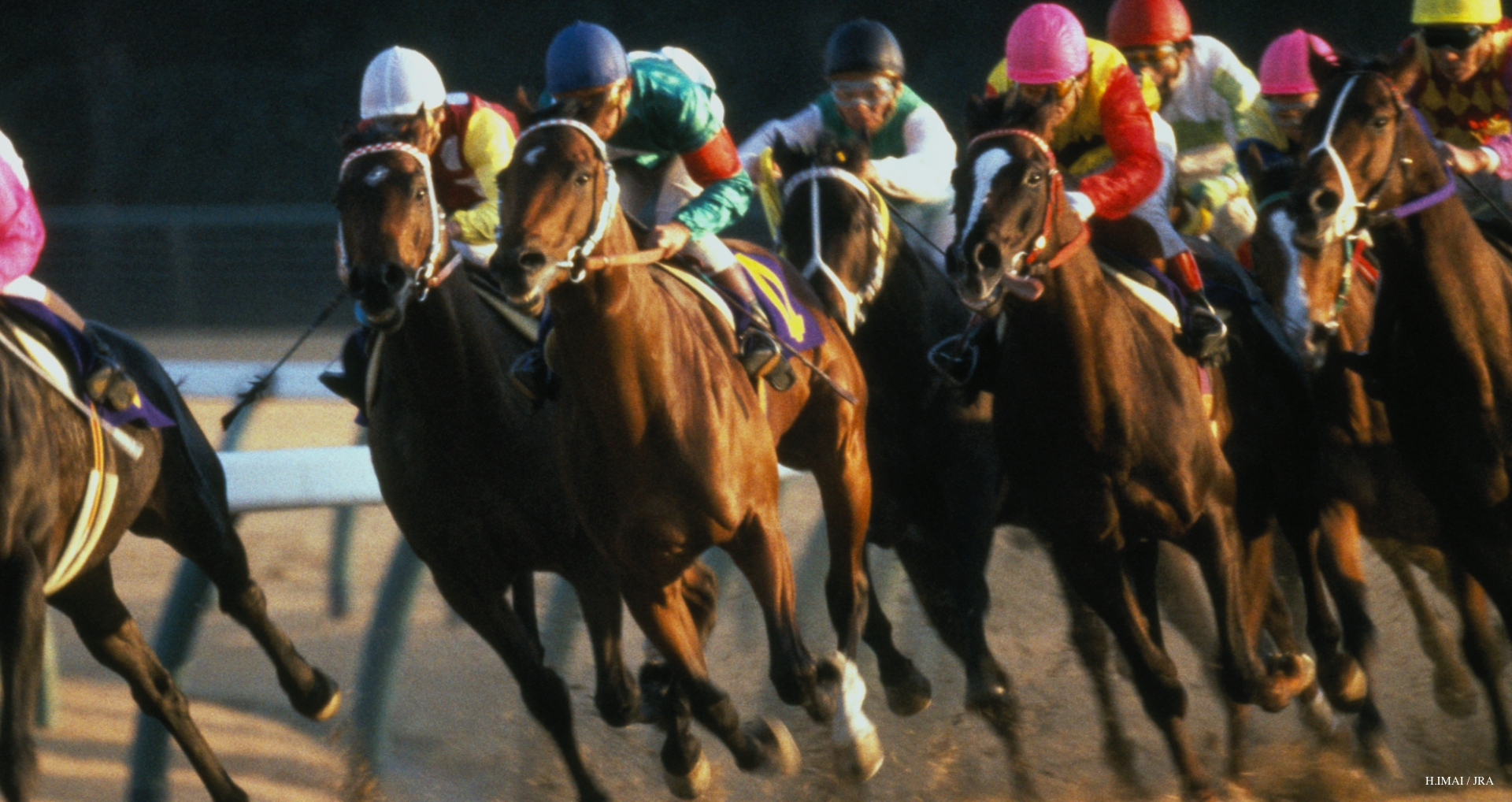 This lineup of the main junmai and junmai ginjo sake, which uses the yeast No. 901, has a clean aroma that doesn’t overpower your food, while its umami serves as the star of your meal. It also has a refreshing aftertaste that enhances other dishes as well. The sake has stable quality born from the technique of the Izumo toji (master brewers) and a proper taste that won’t falter when it’s enjoyed as warm sake.

Many variations of Nanakanba have won awards at the Chugoku Sake Awards, National Kan Sake Contest, and competitions in Europe and Hong Kong.

< History: The Origins of Nanakanba >Symboli Ranch and the Emperor, Symboli Rudolf: the Wada and Tamura Families’ Bond

Symboli Rudolf was the strongest racehorse of the 20th century. He was called “Nanakanba” and “The Emperor” due to his indisputable strength. “Symboli” is the name added to all horses from the Symboli Ranch, and “Rudolf” refers to Rudolf I, the Holy Roman Emperor. He debuted at the Niigata Racecourse’s newcomer race in 1983. The following year, he was the first undefeated Triple Crown at the 4–year–old Classics (current 3–year–old Classics). Afterwards, he won GI races again and again, achieving 7 GI victories, the highest number in history. But Yuji Nohira, who was Symboli Rudolf’s trainer, said, “There are no certainties in horseracing, but there are certainties for that horse.” These words are still repeated today.

The Symboli Ranch and Hikami Sake Brewery’s relationship goes back to when Rudolf was active in 1980. Although Symboli Ranch is a famous ranch with locations in both Narita, Chiba and Hidaka, Hokkaido, its roots go back to Shimane Prefecture. The owners, the Wada family, are from Oda City in Shimane Prefecture, and they are parishioners of Mononobe Shrine, which is located in the same city. At this shrine, the Wada family’s 2nd–generation owner, Tomohiro Wada, offered a statue of the horse Partholon. Partholon was Rudolf’s father, a thoroughbred whose bloodline created an era in the Japanese horseracing world. Takahiro Wada, who was the Wada family’s 3rd–generation owner, married Keiko, the younger sister of our brewery’s 15th–generation owner, Akio Tamura. They married in Shimane on February 11, 1986. This was right after Rudolf earned two consecutive wins at the Arima Kinen and became the first seven crown horse in history. Rudolf’s great achievements and the marriage of the next owner overlapped, resulting in Nanakanba being enveloped in the Wada and Tamura families’ joyous energy.
In 1996, 10 years after Rudolf achieved his seven consecutive wins, this curious twist of fate gave birth to our famous sake, Nanakanba. 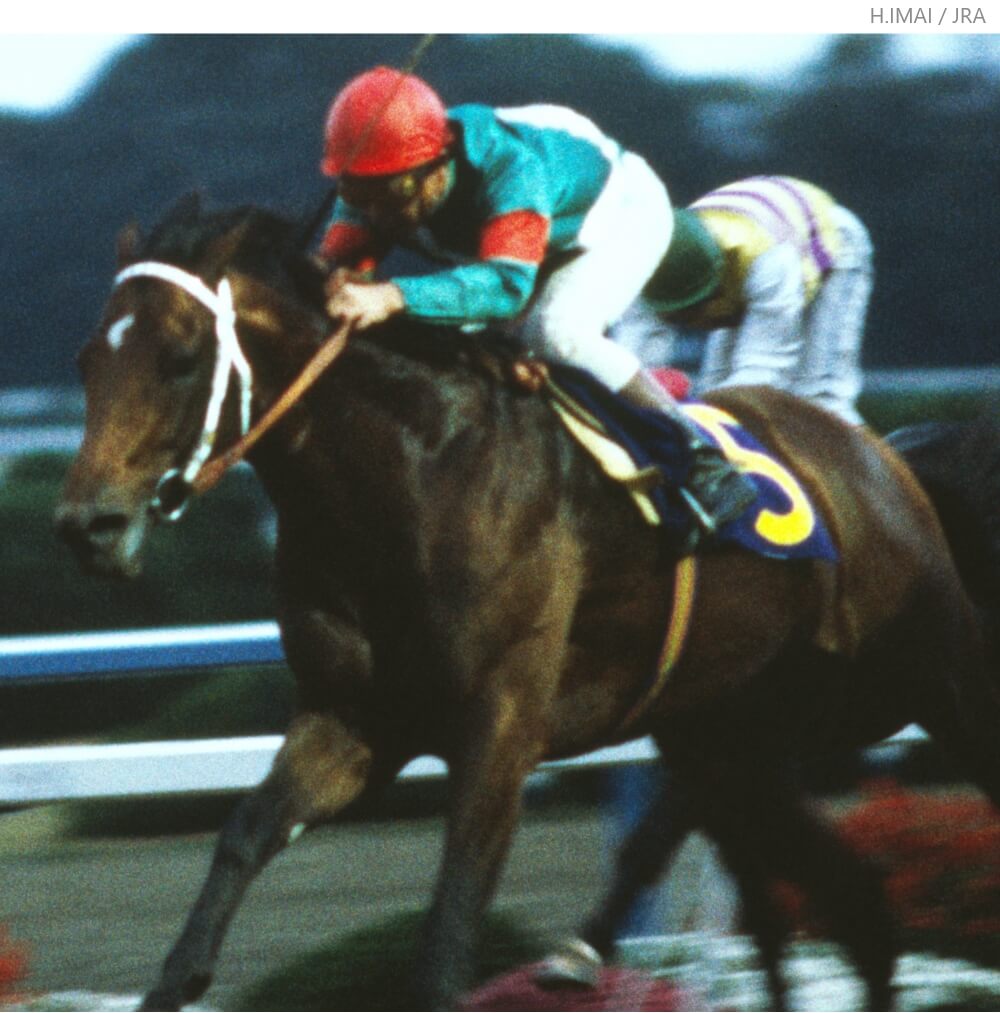 The year 2022 began with Nanakanba’s new symbol. This brand logo represents a heptagon horseshoe. The heptagon refers to Symboli Rudolf’s grand achievement of winning seven crowns. The horseshoe symbolizes both a racehorse and the metal fixtures that protect hooves from wear and tear.

This simple yet powerful symbol exudes a feeling of limitless potential and will stand at the center of Nanakanba’s expansion. We will work harder so that even more customers can enjoy this sake.

Tamahagane uses the finest Yamada–nishiki, which is known as the king of sake rice. Hyogo Prefecture produces 60% of this rice. The rice is polished slowly and thoroughly for three days and brewed almost completely by hand in small batches. The special straining process for “Fukurodori Tobin–kakoi Daiginjo Tamahagane” consists of collecting shizuku (dripped) sake from the layer of clear sake that sits on top of the unfiltered fermenting mash , allowing you to enjoy a gorgeous aroma and elegant, clear sweetness. It has won numerous awards, including the Japan Sake Awards Gold Prize for five years in a row and the International Wine Challenge trophy. Tamahagane has made Hikami’s sake brewing quality known to all of Japan.

From time immemorial, the iron industry boomed in the Okuizumo region due to its super quality iron sand. A traditional ironmaking process (Tatara Ironmaking) was used to make the Japanese iron called Tamahagane, which was supplied to swordsmiths all over Japan as raw material for Japanese swords. After the war, Japan began importing iron from abroad. Tatara Ironmaking was dying out but in 1977 when it was revived in Yokota (currently Okuizumo). Now it is only passed down in the eastern part of Shimane Prefecture. This local traditional industry is what gave birth to our famous sake brand Tamahagane in 1987. 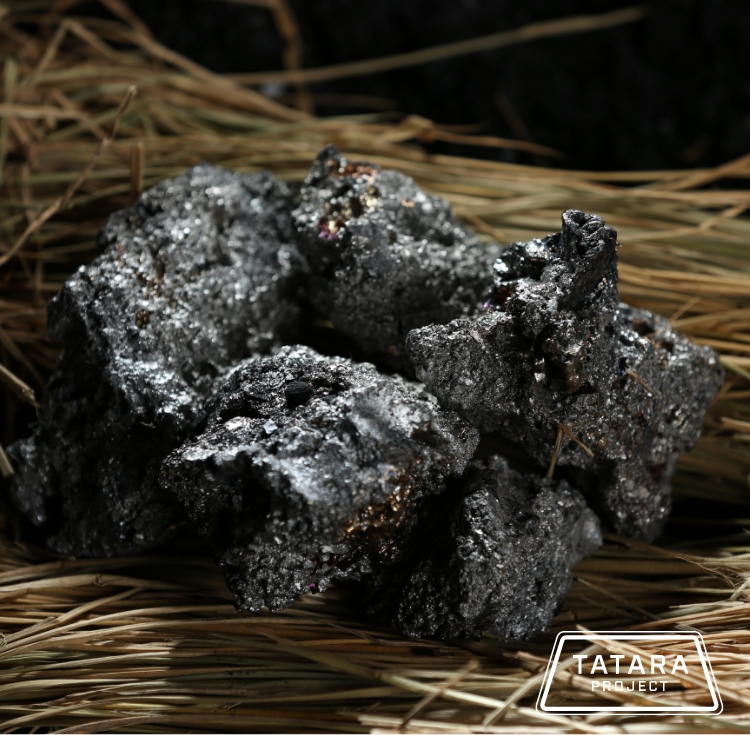 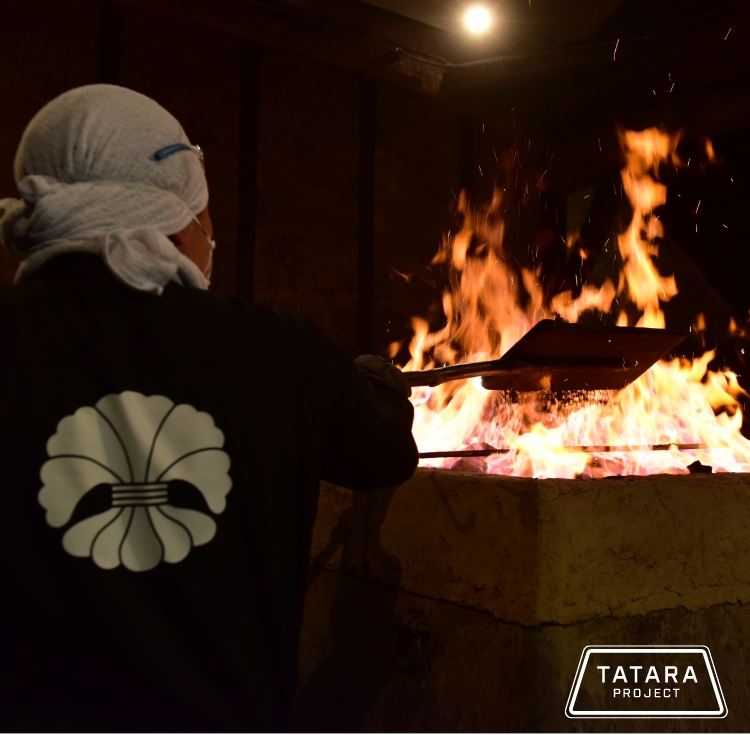 < Tatara >
Tatara Ironmaking still has a deep connection with rice production in the Okuizumo region today. Iron sand, a raw material for iron manufacturing, is found in the mountain soils of the Chugoku region. Mountains were ground down to gather iron sand, and when the sediments flowed into the Hii River, the iron sand would sink to the bottom of the river due to its relative density, while all other sediments would flow downstream. This gathering method is called kanna nagashi.

The old sites where kanna nagashi took place were redeveloped into terraced rice fields. The rice production in the Okuizumo region used the sediment that flowed downstream for new field development. The iron industry that used to make the Japanese iron Tamahagane is now building up the rice cultivation industry, which provides rice for brewing sake at Hikami Sake Brewery. The Obarashinden Rice Terraces in Omaki were designated as one of the 100 Terraced Rice Fields of Japan in 1999, and the Cultural Landscape of Tatara Ironmaking and Rice Terraces in Okuizumo in 2014 as the first important Japanese cultural landscape in the Chugoku region. The connection between Tatara Ironmaking and Okuizumo’s agriculture was designated as a Japanese Nationally Important Agricultural Heritage System in 2019 due to being agriculture with recycled resources from Tatara Ironmaking in Okuizumo. In 2021, it was decided that a proposal would be submitted to join the Globally Important Agricultural Heritage Systems.